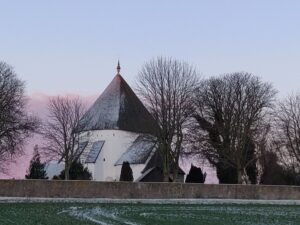 Bornholm is a great place for a holiday. A wonderfully diverse island with a rich history, it has nature in abundance, gorgeous beaches and great food. You can fill your time with visiting attractions, being sporty, pampering yourself or just relaxing. There’s hundreds of miles of largely traffic free cycling and great walking in coast, heath or woodland.

The 200 kilometre coastline has white sandy beaches and sand dunes in the south, proper cliffs in the north and west and a rocky coast of coves, headlands and little sandy bays in the east.

25% of the interior is covered with increasingly wild plantation forests, heathland and natural woodlands – with lots of great (and surprisingly adventurous) walks. Most of the farmland is arable land with just a few herds of organic cattle but is never monotonous with numerous small farm woodlands, streams and rocky outcrops.

There are wild wetlands hidden in the interior, home to bugling cranes from spring to autumn and equipped with birdwatching towers to provide great views of the wildlife and open landscapes.

We are located in arguably one of the most beautiful corners of Bornholm, just 100 metres from the Stavehøl waterfall in the beautiful rocky Kobbeå valley. Just a couple of kilometres from the sea and the handsome little harbour town of Gudhjem with its red roofs tumbling down to the Baltic from the rocky hills above. In the other direction the iconic round church at Østerlars looms above the cycle way less than a kilometre from Stavehøl.

Bornholm is a great island for anyone interested in the past with lots of sites to explore. The south and east of the island are dotted with bronze age burial mounds (barrows), among them older Neolithic chambered cairns (like those at Lundestenen and Vasagård) that you can crawl into the middle of. Many rocky outcrops are decorated with bronze-age rock carvings including fabulous boat and sun symbols at Madsebakke in the north of the island. There are dozens of enigmatic iron-age standing stones and stone circles along the coast or in atmospheric woodlands like those at Gryet and Louisenlund. Medieval castle ruins are scattered among the hills and forests of the island’s interior while the mighty ruins of Hammershus castle dominate the northern coast. And of course the 4 enigmatic round churches still dominate the landscape and symbolise the island.

Stavehøl is itself a site of archaeological interest, where a votive offering of beautifully carved stone axes was found, and lies in the middle of one of Bornholm’s most important and sacred iron-age landscapes where precious ‘goldgubber’ temple offerings have been found in what may have been the most important centre of power and religion on Bornholm in the Viking period.

Phil offers guided tours to some of the best sites on the island and is always happy to offer information and any help.

Stavehøl nestles in a hollow between the 2 arms of the Kobbeå river (the Spagerå and the Præstebæken) surrounded by natural woodlands and rushing streams. It is an incredibly peaceful space filled with bird song and the buzzing of insects. From April to midsummer nightingale song fills the valley, while the woods reverberate to the drumming of woodpeckers and the trilling of wood warblers and pied flycatchers. Dipper (found in only 2 to 3 other places in Denmark) flit from boulder to boulder on our stretch of the Spagerå while buzzard and red kite soar overhead. We are only a 100 metres from the gorgeous little (though Denmark’s highest) waterfall of Stavehøl and the beginning of the adventurous walk down the rocky Kobbeå valley to the sea. In autumn, skeins of geese and bugling cranes pass overhead on their way to the wetlands of the interior.